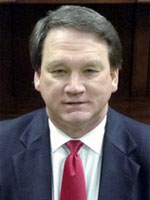 Mark is certified as a Criminal Trial Specialist by the National Board of Legal Specialty Certification. He is a former assistant district attorney for the 4th Judicial District of Louisiana and has been defending criminal cases for several years. He has been involved in a wide range of criminal cases including murder, narcotics offenses and Medicare and insurance fraud. He has represented doctors, lawyers, businessmen, law enforcement officials, and juveniles. He also regularly litigates other civil cases for the firm involving accidents with 18 wheelers, motorcycles, and automobiles in all State and Federal courts. He also handles cases in the area of Civil Rights and 1983 actions against governmental entities.

As the former chairman and current memeber of the Technology Section of the State of Tennessee Bar Association, Mark lectures on the uses of technology in the practice of law and the presentation of witnesses and exhibits at trial.

He was selected to become a life member of the United States 6th Circuit Judicial Conference at the invitation of United States District Judge James Todd.

By maintaining membership in several national and Bar Associations, Mr. Donahoe and the firm stay prepared to regularly litigate in all courts in Tennessee.