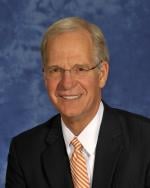 Doug Blaze has served on the college’s faculty since 1993, when he joined as the director of clinical programs. He previously served as dean of the College of Law from 2008 to 2015 until he returned to full-time teaching and serving as director of the college’s Institute for Professional Leadership, which he co-founded. He has also served as director of the Center for Advocacy and Dispute Resolution and interim associate dean for academic affairs.

Before coming to UT, Blaze was a member of the law faculty at Arizona State University and helped establish a community-based legal service clinic. He also practiced with the firm of Fennemore Craig in Phoenix, where his practice involved commercial and tort litigation.

Blaze helped establish a new AALS Leadership Section, and is presently serving as chair-elect of the section.  Blaze previously served on the ABA council on legal education and admission to the bar standards review committee, the AALS membership review committee, and the TBA evolving legal markets committee. He was appointed as an inaugural member of the Tennessee Supreme Court Access to Justice Commission in 2009, and served as chair from 2014 to 2016.

He has received numerous honors and awards, including UT’s prestigious Thomas Jefferson Prize and the president’s Macebearer Award. He received the Harold Love Outstanding Community Service Award from the Tennessee Higher Education Commission and the UT National Alumni Association Public Service Award. In 2013, Blaze received the Deborah Rhode Award from the Association of American Law Schools for his work in promoting pro bono and access to justice. He also received the Bass, Berry & Sims Award for outstanding service to the bench and bar, the Harold Warner Outstanding Teacher Award, and the Carden Institutional Service Award. For his efforts to promote equal access to justice in Tennessee, he received the B. Riney Green Award in 2003.

As much as he loves teaching, Blaze would rather be hiking in the mountains. He hiked the entire Appalachian Trail when he was younger. Now he is slowly hiking it again in bits and pieces, usually with his family.