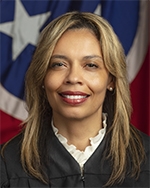 The Honorable Judge Camille R. McMullen received her law degree from the University of Tennessee College of Law in 1996. She served as law clerk for the Honorable Joe G. Riley on the Tennessee Court of Criminal Appeals from 1996 until 1997. She then joined the District Attorney’s office of the 30th Judicial District in 1997 where she prosecuted cases until 2001. She became an Assistant U.S. Attorney for the Western District of Tennessee where she prosecuted cases from 2001 until June 2008. She was then appointed by the former Governor Phil Bredesen to serve on the Court of Criminal Appeals, making history as the first African American woman to serve on any appellate court in Tennessee. Judge McMullen was retained in 2014 to serve another eight-year term on the Court of Criminal Appeals. She is married to Bruce McMullen and they have two children, Reese and Zoe. She has been a member of the National Association of Women Judges, the Tennessee Lawyer’s Association for Women, Board Member for Girls Incorporated of Memphis, Tennessee, Ben F. Jones Chapter of the National Bar Association, Inns of Court (Memphis), and a Memphis Bar Fellow.