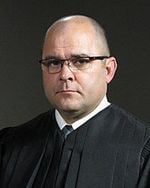 Travis Randall McDonough is a United States District Judge of the United States District Court for the Eastern District of Tennessee and former Chief of Staff and Counselor to the Mayor of Chattanooga, Tennessee. McDonough received a Bachelor of Arts degree in 1994 from Sewanee, The University of the South, where he was named a Harry S Truman scholar. He received a Juris Doctor in 1997 from Vanderbilt University Law School. He served as an associate at the Chattanooga, Tennessee law firm of Miller & Martin, from 1997 to 2004, and as a partner at that firm from 2005 to 2013, additionally serving as head of the firm's litigation department from 2012 to 2013. During his service at that firm, he litigated a wide variety of civil and criminal matters in Federal and State courts. From 2013 to 2015, he served as Chief of Staff and Counselor to the Mayor of Chattanooga.