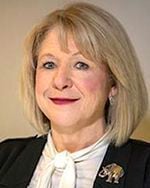 Shelly holds licenses to practice law in both Tennessee and Florida. She has been practicing law in Knoxville and Knox County for over 20 years. Before moving to Tennessee in 1999, Shelly practiced law in Florida for over 11 years, practicing criminal defense as an Assistant Public Defender. Over the course of the last thirty years, Shelly has practiced in both state and federal courts. Shelly’s civil litigation practice over the last 16 years has included real estate, anti-trust, class action, estate, municipal and family law cases. Shelly currently serves as the Secretary of the TBA Board of Governors. She previously served on the Board of Governors, both for the Second District and East Grand Division. Shelly has been a member of the Tennessee Bar Association House of Delegates since 2004, previously serving as the Speaker. She has served on the Knox County Bar Association Continuing Legal Education Committee since 2003 and has served as Co-chair of that committee since 2009.