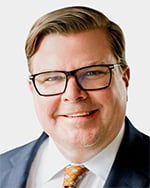 Sean J. Martin grew up in Southern California, but has been in Tennessee since 1992.  He began his undergraduate career at Yale University in New Haven Connecticut, and finished up at the University of Tennessee in Knoxville, Tennessee, where he received both his B.A., and hIs J.D.

Sean began his legal career in Nashville in 1999, working for Judge Marietta Shipley, where he worked on both her family and tort dockets.  He went from there to Cornelius & Collins, LLP and after a few years started his own firm with Kevin Sharp and Jay Drescher, among others.  He has been with Martin Heller Potempa & Sheppard, PLLC since 2013, and couldn't be happier.

For the last fourteen years, Sean's practice has been split evenly between family law and personal injury.  In explaining why he practices in two totally separate areas, he states that he enjoys the variety and the legal challenges posed by each.