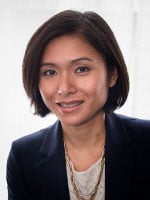 Chay Sengkhounmany is the Lead Immigration Attorney at the Legal Aid Society of Middle TN and the Cumberlands. At Legal Aid Society, Chay directs the Survivors Immigration Legal (SIL) Project and provides immigration legal services to survivors of domestic violence, sexual assault, or stalking. Before returning to Legal Aid Society in May 2019, she was in private practice out of Murfreesboro. Practicing law since 2003, Chay handles a variety of immigration matters but has extensive experience in humanitarian immigration relief, such as VAWA, T visas and U visas. Prior to going into private practice, Chay worked in the non-profit sector for ten years. She directed the Middle Tennessee Medical-Legal Partnership (MTMLP) at Legal Aid Society for about seven years. Through the MTMLP, Chay handled general civil legal matters for the patients of the medical clinics and provided training and education to the medical staff and students. Before joining Legal Aid Society in 2007, Chay worked as a staff attorney for the Immigrant Legal Clinic of the Tennessee Coalition against Domestic and Sexual Violence, where she represented immigrant victims of domestic violence, sexual assault, human trafficking or stalking. Chay frequently presents and writes on immigration law, specifically issues related to victims of abuse or crime.
Chay is a member of the American Immigration Lawyers Association (AILA) and has presented at several regional and national AILA conferences. She is also a member of the American Bar Association, Tennessee Bar Association, State Bar of Georgia, Nashville Bar Association, Federal Bar Association, Middle Tennessee Lawyers' Association for Women, and the Lawyers' Association for Women, Marion Griffin Chapter. She is a 2009 graduate of the Tennessee Bar Association's Leadership Law Program. She was honored by AILA as the 2014 First Quarter Pro Bono Hero for the Southeast Region. Chay earned her Bachelor's degree in Journalism, cum laude, in three years from Middle Tennessee State University and received her law degree in 2003 from Georgia State University College of Law. In 2010, Mercer University Press published her book on the history of the Lawyers Club of Atlanta. Chay is licensed to practice law in Tennessee and is an inactive member in good standing in Georgia.