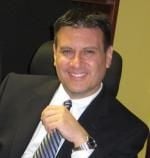 Attorney Steven Simerlein, known to many of his Latino clients as “Abogado Esteban,” has a breadth of professional experience that few other lawyers can offer their clients.  Drawing upon a foundation of over 30 years of experience in the law, business and military, Mr. Simerlein offers compassionate, insightful counseling and vigorous, ethical advocacy for his clients.  His practice focuses on immigration law, and he also assists his clients with certain criminal and family law matters.

Mr. Simerlein began his professional life by earning a B.A. in Political Science from Tulane University, New Orleans, Louisiana, in 1983.  At Tulane, he was a member of the Navy ROTC and participated in an exchange program between the U.S. Navy and Mexican Navy, where he became fluent in the Spanish language.  After his graduation, Mr. Simerlein began a five-year stint in the U.S. Navy.  He first served as the Main Propulsion Assistant on the USS Dubuque (LPD-8), an amphibious transport dock for the U.S. Marines.  While onboard, he lived for about a year in Sasebo, Japan and was designated as a Pacific Fleet Shiphandler of the Year for his ship type.  In 1986, he was assigned as the Combat Systems Officer on the Navy hydrofoil USS Aquila (PHM-4) and participated in drug smuggling interdiction and other special operations in the Caribbean basin.

Following his honorable discharge from the Navy, Mr. Simerlein attended Loyola of Los Angeles Law School, earning his J.D. in 1991.  While in law school, he served as the Senior Note and Comment Editor for the International Law Journal and authored the note, “Rafeedie v. Immigration and Naturalization Service: Summary Exclusion and the Procedural Due Process Rights of Permanent Resident Aliens,” available at http://digitalcommons.lmu.edu/ilr/vol13/iss1/12/.

In 2006, Mr. Simerlein joined the San Diego law firm of Robbins, Umeda & Fink, where he litigated class actions, shareholder derivative lawsuits, insurance disputes and related matters.  He accepted an offer in 2008 from Branstetter, Stranch & Jennings, PLLC to relocate to Nashville and practice in the area of consumer class actions and antitrust law.  He became a partner in that firm in 2010.

In January 2012, Mr. Simerlein opened his own practice in Nashville.  Focusing on all facets of immigration law, he uses his fluency in the Spanish language to directly communicate with his Latino clients if they are cannot speak English or simply feel more comfortable in their native language.  Mr. Simerlein has extensively traveled in Spain, Mexico and other Latin countries, and his unique experiences in many cultures enables him to quickly understand his client’s needs and develop a uniquely effective rapport with them.