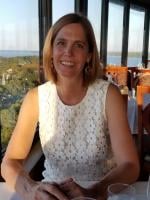 Stephanie Durman has been practicing environmental law with a focus on clean water protections since 2004. She has served as an assistant general counsel at TDEC since fall 2015, and previously worked for environmental NGOs in Boston and Knoxville. Prior to law school, Stephanie developed housing for the homeless and other low-income people in the Seattle area for 11 years. Stephanie holds a J.D. from the University of Washington with a concentration in environmental law and a B.A. in economics and political science from Yale University.