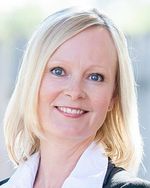 Katja is a sole practitioner in Murfreesboro, TN.  She practices exclusively immigration law. Born in Finland and having lived, studied and worked in several different countries, the private practice of immigration law was a natural choice for her. Katja holds three law degrees. Her American law degree was earned at Vanderbilt University law school (LL.M). Her two other law degrees are from the University of Helsinki (Finland) and Uppsala University (Sweden), where she graduated with an LL.M. degree; the equivalent of an American J.D. She has also studied international law in Israel and Germany.