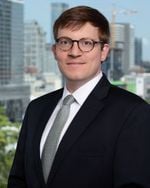 Scott Douglass helps his clients grow their businesses by protecting and enforcing their trademarks, patents and copyrights. He efficiently litigates their rights in federal court and enforces their trademarks before the U.S. Patent and Trademark Office. He also helps clients maximize the value of their intellectual property through licensing and online domain name enforcement.

During law school, Mr. Douglass worked as a summer law clerk for two federal magistrate judges in the Middle and Western Districts of Tennessee. He also clerked for the General Counsel of one of the largest tobacco companies in the world. Before attending law school, Mr. Douglass worked as a legislative aide to two United States Senators and studied Arabic in the Middle East.