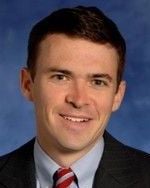 Stuart Burkhalter practices complex commercial litigation.  He has experience in both state and federal court, as well as private arbitration, on a range of different matters, including commercial contract disputes, employment and non-compete issues, residential and commercial real estate disputes, parent-company liability matters, and intellectual property litigation. He also frequently represents providers in managed care disputes and other litigation.

Stuart has been named in Mid-South Super Lawyers as a Rising Star since 2016.  The Tennessee Bar Association awarded him the 2018 Justice Joseph W. Henry Award for Outstanding Legal Writing for his article on hospital lien law referenced below.

Stuart graduated from Vanderbilt Law School in 2010 where he was a member of the Order of the Coif and received the John A. Cortner Award for winning the Vanderbilt Intramural Moot Court Competition.  Stuart graduated with distinction from the University of Virginia in 2003 with a double major in English and Media Studies.

Prior to attending law school, Stuart lived and worked in Washington, D.C. and New York City during which time he wrote and produced an award-winning 32-minute short film, Of Age (2005). Since then, Stuart has self-published a memoir, Catawampus: The Fertility Process from a Man's Perspective (2014), which, among other things, was named a Finalist in Foreword Reviews’ INDIEFAB Book of the Year Awards, and a children’s book, Do Little Babies Dream of Mu? (2020).