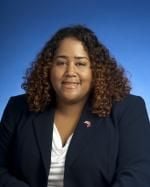 Raumesh Akbari’s interest in politics and community activism in her hometown of Memphis led to her winning a special election for House District 91 in the 108th General Assembly in the fall of 2013.   It was mid-term, and she faced the daunting task of following in the footsteps of the legendary Representative Lois DeBerry, whose death in July 2013 prompted the special election.

Representative Akbari hit the road running, and she was re-elected in 2014.  She is now facing another election this fall to become a member of the 110th General Assembly.   She is a hard working representative, serving as an effective and vocal member of the House Criminal Justice Committee and Subcommittee, and the House Education Instruction and Programs Committee.  A graduate of Washington University in St. Louis, Missouri and the Saint Louis University School of Law, her background has been instrumental in both formulating and implementing policy.  She has authored several bills affecting economic disparities and job creation, criminal justice reform, school programs and regional health issues.

Beyond her obvious responsibilities, Representative Akbari has also taken a leadership role in several legislative organizations, and she is the recipient of many honors and awards both locally and nationally.  Those honors include being selected as a 2015 Henry Toll Fellow, sponsored by the Council of State Governments; as a 2015 Early Learning Fellow, sponsored by the National Council of State Legislatures; and as a participant in the 2015 Emerging Leaders Program, sponsored by the State Legislative Leaders Foundation.  Her legislative efforts have also led Governing Magazine to select her to be in the second class of its Governing Institute, a program for outstanding appointed or elected women officials.

Last year, Representative Akbari was one of twelve delegates invited by the Canadian Embassy and the Canadian Consulates General to participate in Canada’s Rising State Leaders Program, and then in the fall, she was selected to take part in a two-week cultural exchange program in Australia as one of a handful Americans selected by the American Council of Young Political Leaders.

Back in her hometown of Memphis, Representative Akbari is most active, spearheading a county-wide effort to clean up neglected and abandoned cemeteries, and working in the area of justice reform, re-entry work programs for qualified felons, and restoration of voting rights.

Her interest in education has led to her sponsorship of several pieces of legislation affecting school achievement and rankings, volunteer mentoring programs for the lower grades, and regulations to inhibit immediate school closings.

On a personal level, she and her family own and operate the World Trichology Institute and the Lisa Akbari Hair Care Products line.  Theirs is a mission of public service, devoted to the needs of the people of their community, of Memphis and Shelby County, and of the entire State of Tennessee.