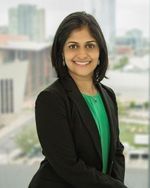 Ms. Mohan graduated from Northwestern University’s Medill School of Journalism and earned her J.D. from the University of Tennessee College of Law, where she was a member of the Order of the Coif.  In law school, Ms. Mohan served on the National Moot Court Team, which placed second in the nation in 2010, chaired the Moot Court Board, and served as a staff editor for the Tennessee Journal of Law and Policy.  Ms. Mohan received a certificate of academic excellence in several subjects including, Pretrial Litigation, Evidence, Trial Practice, and Federal Courts.

Prior to joining Sherrard & Roe, Ms. Mohan served as a law clerk to the Honorable Gilbert S. Merritt, U.S. Court of Appeals for the Sixth Circuit.  During law school, she also interned at the Tennessee Supreme Court.

Before starting law school, Ms. Mohan worked as a television reporter and anchor, most recently at WTVF, Newschannel 5 in Nashville.  During that time, she received two Emmy awards for her coverage of the 2004 Asian tsunami.  Ms. Mohan currently hosts “Ask the Attorney”, a live monthly call-in show on Newschannel 5/Cable Channel 50.