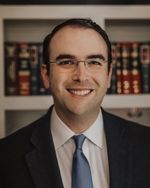 Daniel A. Horwitz is a constitutional lawyer practicing in Nashville, Tennessee.  He is the recipient of the 2018 Harris Gilbert Award from the Tennessee Bar Association and a nationally renowned impact litigator.  Horwitz has also been recognized by the American Bar Association as one of the top 40 young lawyers in the United States, and the Nashville Post has repeatedly recognized him as one of the “Best of the Best” lawyers in Nashville.  Horwitz’s selected case history is available here.

Horwitz is a graduate of Cornell University and Vanderbilt Law School.  He is admitted to practice law in every court in Tennessee as well as the U.S. Court of Appeals for the Fifth, Sixth, Seventh and Eleventh Circuits.  A former judicial law clerk for the Tennessee Supreme Court, Horwitz’s award-winning legal scholarship has appeared in numerous law journals including the Harvard Latino Law Review, the N.Y.U. Journal of Legislation & Public Policy, the University of Memphis Law Review, the Tennessee Journal of Law and Policy, the SMU Science and Technology Law Review, the Tennessee Bar Journal, and the Nashville Bar Journal.  His work has also been cited in several other legal and popular publications including the New York Times, the Washington Post, NPR, the Associated Press, the American Bar Association Journal, Forbes, the Nashville Business Journal, The Tennessean, the Nashville Post, The Memphis Commercial Appeal, The Nashville Scene, Slate, and in multiple pleadings filed before the U.S. Supreme Court.