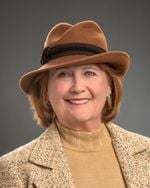 Barbara Moss, the founder of Elder Law of Nashville, has been practicing law in Nashville since 1977. She focuses her practice on elder law, conservatorships, probate, asset preservation, TennCare and Veterans' Benefits.
Barbara has been frequently named by her peers as "Best of the Bar" (one of the 100 best lawyers in Nashville) , has been chosen as a Mid-South Super Lawyer in Elder Law by Law & Politics Magazine, (2006-present), has been listed in Nashville's Best Lawyers, (2011-present); was named by peers to be included in The Best Lawyers in Americac in the practice areas of Commercial Litigation, Litigation - Construction, Litigation - ERISA, Litigation - Labor & Employment and Litigation - Trusts & Estates (2005-present); was named by peers as one of Nashville's Best Lawyers." The Tennessean (2010); was named as one of "Top Lawyers" by Labor +Employment r (2010); was selected by Memphis Magazine as one of the Top 50 Women Attorneys In The Mid-South; is a Martindale-Hubbell Top Rated Lawyer (2012); and is named to the Martindale-Hubbellr Bar Register of Preeminent Women Lawyers (2012). She was an Adjunct Professor of Law at the Vanderbilt School of Law from 1984 to 2000, and will be teaching Elder Law at the Nashville School of Law beginning 2021.
Barbara holds the distinction of being the first woman to chair the Board of Professional Responsibility of the Supreme Court of Tennessee, the organization responsible for all attorney ethics and discipline in Tennessee. She has been recognized for her contributions to the law profession and the community with numerous honors including the Athena Award in 2007, induction into the YWCA Academy of the Women of Achievement in 2008, the Molly Todd Cup in 2009 presented by Nashville networking organization CABLE, and Nashville Business Journal, Women of Influence in 2007.
Barbara is a 1977 graduate of Vanderbilt University School of Law. Barbara is a frequent contributor to The Tennessean, where her columns have appeared in the business section and on the op-ed page.