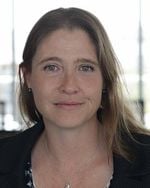 Kristin Thomas, founder and owner of KT Designs, has extensive experience in litigation, corporate, and marketing design. She is also one of the few classically trained artists cross-trained and experienced in trial technology support and jury consulting. Prior to opening KT Designs, Ms. Thomas was the Multimedia Graphics Manager for Taylor Companies, an international mergers & acquisitions firm in Washington, DC. From 2004 to 2006, she directed the trial presentation and on-site design consulting division of Animators at Law. She also held positions at Skadden, Arps, Slate, Meagher and Flom, LLP from 2000 to 2004, eventually directing the graphics department for the Washington, DC office. Ms. Thomas earned her Bachelor's degree in Graphic Fine Arts from Auburn University in 2000.

With over a decade of experience in litigation, Ms. Thomas artistically assists clients in various legal matters, including intellectual property, fraud, legal malpractice, insider trading and personal injury. She has worked on a variety of matters in State and Federal Courts throughout the country, including matters before the Bankruptcy Court, international bodies such as the International Trade Commission, the World Trade Organization, and on many high profile, multi-million dollar trials such as Coleman v. Morgan Stanley, Enron, HealthSouth, Duke v. MISO, First Energy v. MISO, and Anvik v. Nikon.

In addition to litigation graphics, Ms. Thomas is an accomplished information designer with experience in corporate branding, package design, marketing, website design, offering memorandums, annual reports, and fine art (gallery art). Her artwork has been exhibited at various venues and been acquired by private collectors. Her designs have been presented to such prominent figures as members of the U.S. Congress, Pope John Paul Il, and the King of Dubai. Corporations, including Tyco, Citibank, and the Golf Life Institute, and non-profit organizations, such as the Korean American Commission (KAC), the Iranian American Bar Association (IABA), and the Innocence Commission for Virginia, have contracted with her for a variety of projects including, but not limited to, logo creation/institution identity, visual presentation development, marketing, and package design.