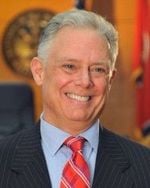 Hon. Michael Binkleyis a graduate of Birmingham Southern College, earning a degree in History, and a 1977 graduate of Vanderbilt School of Law.  He is currently sitting as Circuit Court Judge and Chancellor, Division III, of the 21st Judicial District, which serves Williamson, Lewis, Perry & Hickman Counties, being elected to this position on March 6, 2012, and sworn in on August 31, 2012. During Judge Binkley's 33 years of private practice in the areas of criminal defense, personal injury, workers' compensation and domestic relations, he was the sole counsel in 17 reported cases in the State of Tennessee Supreme Court as well 30 unreported cases in the Tennessee Court of Appeals.  During his private practice, Judge Binkley was invited and participated in over 25 presentations at legal educational seminars sponsored by the Tennessee Bar Association, the Tennessee Association for Justice, the Nashville Bar Association, and other bar associations throughout Middle Tennessee and the State of Tennessee, including Knoxville, Memphis, Cookeville, Chattanooga and other cities throughout the state.  Since being elected to the bench, Judge Binkley continues to conduct legal educational seminars throughout Middle Tennessee.