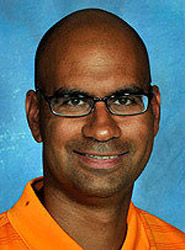 Hemant Sharma is a graduate of Cornell University, where he was a member of the Dean's List and winner of the prestigious James E. Rice Writing Prize, granted annually to the top essays composed in all writing seminars at Cornell. He also earned All-Ivy League honors while serving as the goalkeeper for the nationally-ranked men's soccer team, leading the squad into the NCAA Tournament and establishing a school record for shutouts during his senior year. He was a draft pick of three professional indoor soccer leagues, and went on to play professional soccer for five years. He arrived in Knoxville, Tennessee in 2004, and completed his PhD in Political Science in 2009. He passed comprehensive exams in the fields of Public Administration and American Government, earning distinction in both fields. He also was the first recipient of the University of Tennessee's Otis Stephens Fellowship. His dissertation was entitled "The Sword, The Purse and the Gavel: Institutional Influences on the Behavior of Supreme Court Justices." Statistical models from his dissertation were discussed in the Knoxville News Sentinel and the Wall Street Journal Online following the appointment of Justice Sonia Sotomayor. Authors of the book John Paul Stevens: An Independent Life also acknowledged Hemant for providing data used in their project.

Hemant has co-authored two textbooks with John Scheb. The first is entitled An Introduction to the American Legal System, which is published by Wolters-Kluwer and is now its fifth edition; the second is Administrative Law and Policy, released in 2021 by Carolina Academic Press. He also has co-authored, with Colin Glennon of ETSU, an e-book entitled Evolution of a Constitutional Republic: An Introduction to American Government, published by Great River Learning. He has been an author on peer-reviewed articles that appeared in Justice System Journal, Judicature, and Social Science Quarterly. He also has played a key role in the UT Department of Political Science study on capital punishment in Tennessee, serving as an author on “Race and the Death Penalty: An Empirical Assessment of First Degree Murder Convictions in Tennessee after Gregg v. Georgia,” which was published in the Tennessee Journal of Race, Gender and Social Justice.