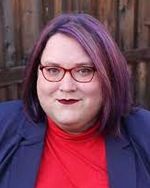 As Director of Advocacy and Civic Engagement, Vivian Topping works with state-based LGBTQ organizations to craft smart, effective legislative and electoral campaigns that build political power and allow supporters to take action in their communities. In this role, Vivian built Project Game Changer, a coaching and development program to support LGBTQ state-based organizations in building year-round organizing programs. Vivian has also grown the Advocacy team at the Equality Federation from one sole member to herself and a team of three other organizers.

Most recently Vivian was the Field Director for the historic, winning Yes on 3 campaign in Massachusetts, Vivian previously led electoral and legislative advocacy programs in Michigan, Florida, Pennsylvania, Arizona, Texas, and Illinois. Her work in Massachusetts was a groundbreaking success that built the leadership of transgender people and had more than 100,000 conversations with voters, ultimately winning the first statewide referendum on transgender rights in the nation.