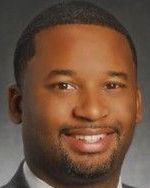 Lonnell Matthews was elected as Davidson County Juvenile Court Clerk in 2018. Lonnell is a native of Nashville, Tennessee who grew up in the Bordeaux community. He graduated from Martin Luther King Magnet High School and is a proud alumnus of Tennessee State University where he studied Accounting and Business Law. Lonnell’s career in youth development began over 19 years ago at the YMCA of Middle TN where he led youth empowerment programs such as the Y-CAP, Positive Beginnings, Black Achievers, Latino Achievers, Reach & Rise Mentoring, Step Up, NAZA Z and Fun Company.

Committed to the North Nashville community, Lonnell Matthews, at age 27, became the youngest African-American elected to Nashville’s Metro Council, representing District 1. While completing an 8-year term, he served as the Speaker Pro Tempore and chaired the Budget & Finance, Education, and Parks & Recreation committees.

Lonnell also served as the District Executive Director of Youth Outreach at the YMCA and as an elected official until his appointment to Mayor Megan Barry’s Administration in 2015.