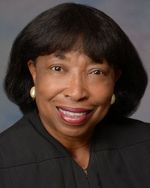 Hon. Bernice Donald is a Judge on the United States Court of Appeals for the Sixth Circuit. She was nominated to that position by President Barack Obama and was confirmed by a vote in the Senate on September 6, 2011. Prior to that, Judge Donald sat on the U.S. District Court for the Western District of Tennessee. She was appointed to the district court by President William Jefferson Clinton in December 1995. She was sworn into office in January 1996. She previously served as Judge of U.S. Bankruptcy Court for the Western District of Tennessee, becoming the first African American woman in the history of the United States to serve as a bankruptcy judge. In 1982, she was elected to the General Sessions Criminal Court, where she became the first African American woman to serve as a judge in the history of the State of Tennessee. She received her law degree from the University of Memphis School of Law where she has served as an adjunct faculty member. She also serves as faculty for the Federal Judicial Center and the National Judicial College. In 1996, Chief Justice Rehnquist appointed Judge Donald to the Judicial Conference Advisory Committee on Bankruptcy Rules where she served for six years. She is extremely active in the American, Tennessee, and Memphis Bar Associations, serving in vital leadership roles in key committees. She currently serves as Secretary of the 430,000 member American Bar Association.