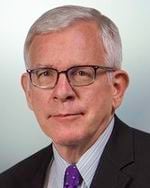 Dean B. Farmer received his undergraduate degree from the University of North Carolina, Masters degree from Harvard University and law degree from the University of Tennessee in 1979. He has served as a member of the Board of Professional Responsibility Hearing Committee of the Supreme Court of Tennessee and holds memberships in the Defense Research Institute, the American Bankruptcy Institute and the National Association of Bankruptcy Trustees. His practice involves diverse corporate and commercial litigation, including Chapter 11 reorganization, corporate debtor and creditor representation, and defense practice in civil rights and governmental entity representation. The governmental entity representation includes sheriff's departments, county commissions, school boards, utility districts, ambulance services, highway departments, election commissions and other matters related to county government throughout the State of Tennessee. He was a Certified Business Bankruptcy Specialist by the Tennessee Commission on Continuing Legal Education and Specialization as well as the American Bankruptcy Board of Certification from 1995 to 2001. He has served as a board member of the Mid-South Commercial Law Institute. Mr. Farmer was qualified as a mediator as approved by the Tennessee Supreme Court Alternative Dispute Resolution Committee and participant on the federal mediation panel for the United States District Court for the Eastern District of Tennessee. He currently serves on the Pro-Bono panel of the Knoxville Bar Association. He is panel trustee for the Unites States Trustee's Office in the United States Bankruptcy Court for the Eastern District of Tennessee. He frequently lectures on bankruptcy as well as civil rights topics.