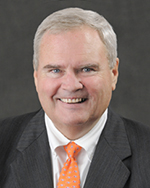 George T. Lewis III is a shareholder in the Memphis office and chairs the Appellate Practice Litigation Group. A former president of the Tennessee Bar Association and the recipient of numerous professional awards, Mr. Lewis is a litigator whose focus is solving complex business, personal injury, insurance coverage, Consumer Protection Act, health care and class action litigation problems for his clients. He also has extensive experience in securities and governmental law. Mr. Lewis is a Rule 31 Listed General Civil Mediator, and in 2013 the American Arbitration Association added Mr. Lewis to its panel of arbitrators.
Mr. Lewis' service to the legal profession is extensive. He has held numerous leadership positions in his profession and community. He served as president of the Tennessee Bar Association and president of the Tennessee Legal Community Foundation and was appointed by the Tennessee Supreme Court to chair the Tennessee Access to Justice Commission. He has also served as president of the Memphis Bar Foundation and as chair of the Mid-South Chapter of the American Red Cross. In 2006, the Tennessee Judicial Selection Commission recommended Mr. Lewis to the governor for appointment to the Tennessee Supreme Court.
In 1991, the Tennessee Supreme Court appointed him to the Board of Directors of Tennessee's Lawyers Fund for Client Protection. In 1999, the Supreme Court appointed him to the Advisory Commission on Rules of Trial and Appellate Procedure. In August of 2009, he was appointed to the TBA Judicial Conduct Committee. In 2014, ABA President William Hubbard appointed him to the American Bar Association Pro Bono and Public Service Committee.
Mr. Lewis is listed in The Best Lawyers in Americar and Mid-South Super Lawyers across numerous areas of litigation and appellate law. In 2007 and 2010, Mr. Lewis was named to the Honor Roll of the American Bar Association Torts and Insurance Practice Section.
From 1980 to 1981, Mr. Lewis served as law clerk for the Honorable Frank Drowota, Tennessee Supreme Court. While in the joint J.D./M.B.A. program at the University of Tennessee, he served as the vice chair, and then chair, of the Moot Court Board. He was also a member of the Securities Law Moot Court Team and Labor Law Moot Court Team.