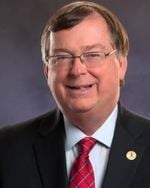 Bill Young graduated from Vanderbilt University in 1978 and Vanderbilt University Law School in 1981.
Bill served as law clerk for United States Bankruptcy Court Chief Judge George C. Paine from 1981 to 1984. Thereafter, he practiced in the Washington D.C. office of the Memphis-based law firm, Laughlin, Halle, Clark, Gibson & McBride. In October of 1985, Bill moved back to Nashville to pursue his practice with the firm Speight & Parker, focusing on commercial/bankruptcy and insurance law. Subsequently, he was with the Tennessee Attorney General's Office as Assistant Attorney General for the Tax Division from 1986 to 1990 and Senior Counsel from 1990 to 1995. He then was selected to be the Deputy Commissioner of the Tennessee Department of Commerce and Insurance in charge of TennCare oversight from 1995 to 1998. From there, he held positions with Tennessee's hospital associations and Vanderbilt University from 1998 to 2002. In 2002, Bill moved to Chattanooga to take the position of Senior Vice President, General Counsel and Chief Compliance Officer for Blue Cross Blue Shield of Tennessee. He returned to the Tennessee Attorney General's Office as Solicitor General in 2011 and became Director of the Administrative Office of Courts in 2013. From 2014 to 2016, Bill joined the Attorney General's senior management team, handling special litigation and relationships with the Tennessee General Assembly, Executive Branch, and other state offices.. Bill was appointed by Governor Haslam to serve as Chancellor for Part II of the Davidson County Chancery Court of the 20th Judicial District in 2016. After leaving the bench on August 31, 2018, Bill joined the Nashville office of the law firm Harris Shelton. In October 2019, Bill was selected as the Executive Director for the Bureau of Ethics and Campaign Finance.
Bill is a member of the Nashville, Tennessee and American Bar Associations; and a Fellow in all three associations. He is also a member of the American Health Lawyers Association and is an emeritus member of the Inns of Court. He currently serves on the board of the Nashville Bar Association. He has served on both the Tennessee Judicial Nominating Commission and the Governor's Appellate Appointment Advisory Commission, and was an adjunct professor at Belmont College of Law, teaching conflicts of law. Bill is also on the Board of Directors of Park Center, a non-profit outreach organization providing housing solutions and employment resources to those suffering from mental illnesses, addiction, and homelessness, and was a past Chair of the Park Center Board. Bill is married to Jane Young, General Counsel for the Tennessee Department of Health.
Bill and Jane have one daughter, Beth, who is a certified public accountant with Envision in Nashville. He and his wife are members of Hillsboro Presbyterian Church.