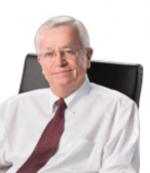 Muecke Barker is a member of the firm's Litigation Section, concentrating his practice in mediation, arbitration and alternative dispute resolution. He brings more than 30 years of experience serving at all levels of the Tennessee Judiciary to the firm.

Muecke began his service in the Tennessee Judicial System in 1983, when he was appointed by Governor Lamar Alexander to become Judge of the Circuit Court of the Eleventh Judicial District of Tennessee. In 1985 he attended the National Judicial College, University of Nevada at Reno. He was elected to two eight-year terms and was consistently the highest rated circuit court judge by the Chattanooga Bar Association's bi-annual polls.

In 1995, he was appointed to the Tennessee Court of Criminal Appeals and was elected by Tennessee voters in August 1996. In 1998, Governor Don Sundquist appointed Muecke to the Tennessee Supreme Court. He was then elected to a full eight-year term and again in 2006. In 2005, he was unanimously chosen by his colleagues to become Chief Justice. Upon his retirement from the Supreme Court in September 2008, former Chief Justice Barker was named Appellate Judge of the Year by the Tennessee Chapter of the American Board of Trial Advocates.